Internal structure of crystals and gems

Now remember the old elemental chart you used to refer to for chemistry lessons at school? Known as the Periodic table, this chart was first devised by a Russian chemist named Dmitri Mendeleev in 1869 as a means of showing the recurring changes in the properties of the elements. Minerals are formed from one or a combination of two or more elements.

Think of the earth as one giant onion with layers of skins like onions do. Broadly speaking, our earth has an outer layer of solid crust, which is where all the living things on earth are on, a mantle of liquefied molten lava rock, and a core made up of an outer and inner layer, with the outer layer being softer and the inner layer being really solid rock due to all the weight and pressure being exerted inwards.

This is the natural outer structure of a quartz crystal, which is a 6 sided hexagonal termination

The rocks which make up the Earth (and other planets as well) are made up of minerals, which are almost always made up of crystals. Even your bones have tiny crystals in them, as do kidney stones, a common malady of the kidneys, which are formed from the pooling and hardening of dissolved minerals in the urine.

A crystal is defined as a solid substance that has its atoms or molecules arranged in a clear repetitive pattern. In ideal conditions, a crystal will display the same construction pattern in which its atoms or molecules are arranged, but normally many crystals form simultaneously and grow into each other thus forming an aggregate, or an irregular mass; a rock being an example.

The internal structure of graphite

Crystal habit is the general shape of crystals, and these shapes are fixed building patterns usually described as being formed from one of these basic geometric patterns. It’s rare to find a perfect crystal in the wild, since temperature, pressure, chemical conditions, and space affect crystal growth one way or the other. So, that is why naturally clear and beautifully shaped crystals can cost a lot of money. 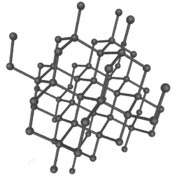 The internal structure of diamond.

The study of the internal atomic structure of crystals is a scientific branch of its own. Have you wondered why graphite and diamond are so different and yet made from the same element, carbon? The answer is in their internal structure.

In graphite, the atoms are linked in a hexagonal structure, which exist in wide spaced layers and connected weakly. In diamonds, each atom is linked to four others and arranged in tight rigid structure. In the case of crystals and gemstones, the layout and linking of the atomic structure within them will determine their hardness or fragility.

And get our FREE Crystal Grid eBook that shows you how to build a crystal grid in accordance with the universal Law of Attraction and attract what you want into your life!

Thank you for subscribing. Please check your email within the next few minutes.

We hate spam too. Your email address will not be sold or shared with anyone else.